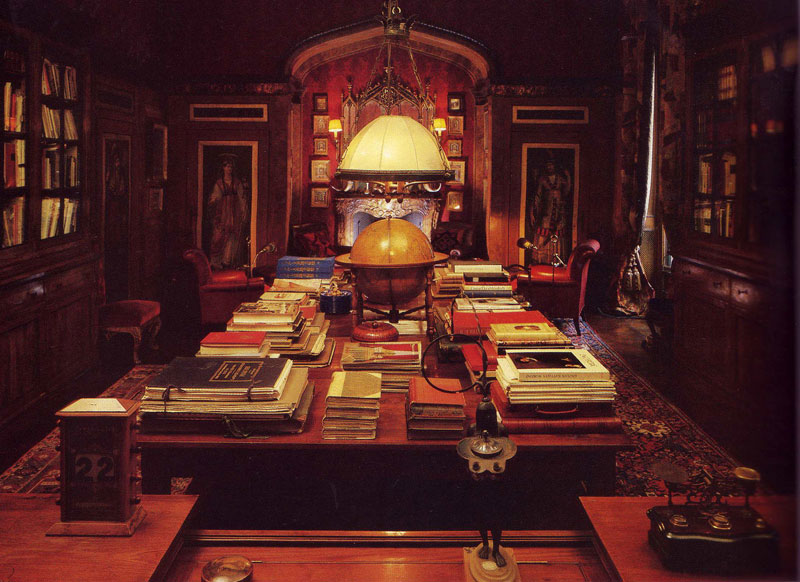 Renzo Mongiardino raised atmosphere to an art form, creating a series of interiors throughout his lifetime that continue to resonate today. A master in making a featureless room appear rich and busy with life,  Mongiardino would layer colours and textures, mix furniture and accessories from different eras, create atmosphere through lighting… Whilst we can’t all have Renzo Mongiardino’s talent (he was described by the New York Times as having a “wild painterly vision” and “living in a universe that was visible only to him”) many of his ideas remain a huge source of inspiration :

Renzo Mongiardino began as a set designer, designing the decors for the opera Tosca at Covent Garden and Zeffirelli’s films Romeo & Juliet, Brother Sun, Sister Moon and The Taming of the Shrew. Mongiardino used the same techniques in interior design as in set design; what mattered for him was visual impact. Designer Nika Zupanc says something similiar in a recent interview in British Vogue “Interiors are a stage for our lives. It’s not just about the materials or the beauty or the function, it’s more like scenography… creating tension, emotion”.

2/ Commission an artist to decorate the walls

Renzo Mongiardino depended on collaborations with artists and illustrators, such as Lila de Nobili and craftspeople  — painters, gilders, faux finishers. Mongiardino grew up in a Baroque Genoese palazzo and frequently quoted a maxim of Honoré de Balzac’s,”The wise man goes back to the origins of ancient times”. Yet despite his obsession with the past, Mongiardino’s work is modern in that he disregards era, freely mixing and matching. In his book Roomscapes (recently reissued as a result of the Milan Castello Sforza exhibition) Mongiardino wrote “I think it is a mistake to treat ancient and modern as if a barrier divided them…” 4/Add a touch of orientalism

Mongiardino was open to influences from other cultures, as well as other times. He once famously clad Lee Radziwill’s London drawing room in a wondrous multi-patterned explosion that invoked both the Ottoman Empire and Raj-era India. “There is nothing as good, as wonderful, as attending a dinner party and being surrounded by magnificent objects,”says Martina Mondadori, founder of Cabana Magazine, who was lucky enough to grow up in an apartment decorated by Renzo Mongiardino. In Vogue, she describes how Mongiardino put the finishing touches to her family’s dining room : “My parents had a set of six Japanese Imari dessert plates, and one day, when the room was already finished with the fabric and the stencils, my mum served dessert on them at a party where Renzo Mongiardino was a guest. He took his plate, stood up, and started wandering around the room with it. He then asked my mum: ‘Do you have more of these?’ She replied no, and he suggested she buy more and cover the whole room with them…” The Zanussi apartment in Milan, decorated by Renzo Mongiardino.