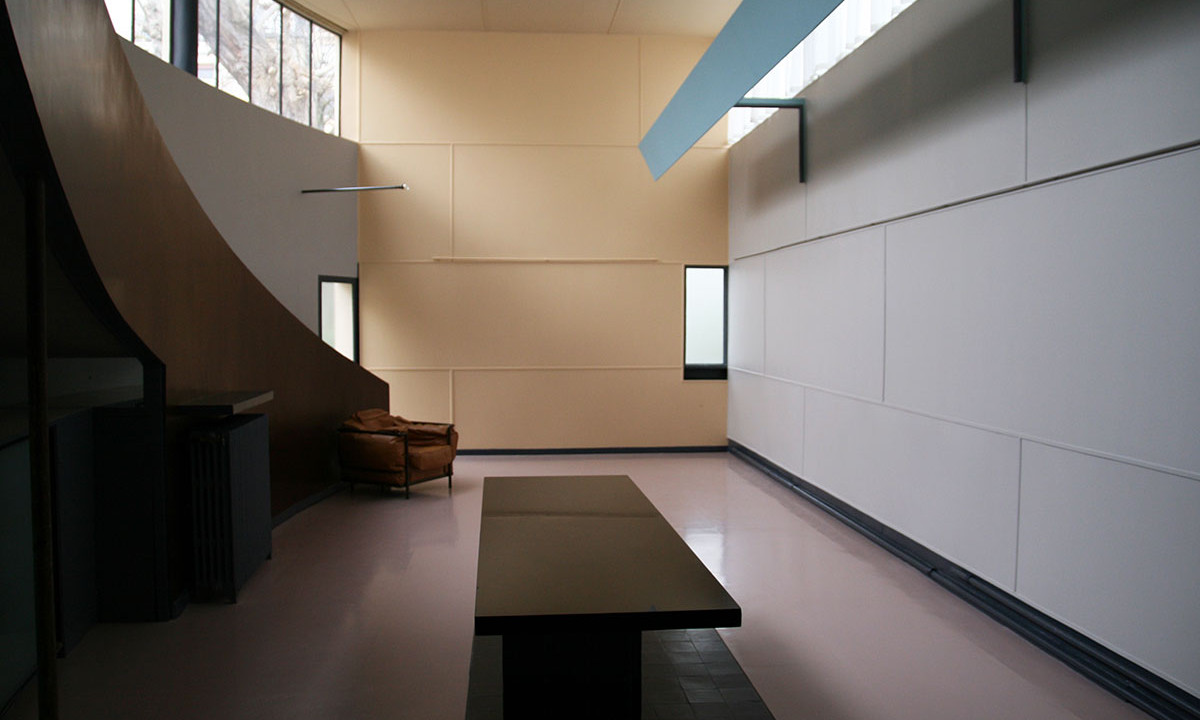 Built between 1923 and 1925, the La Roche and Jeanneret House combined the house and art gallery of Swiss art collector and bachelor Raoul La Roche and the house of Le Corbusier’s brother, Albert Jeanneret, wife Lotti Raaf and their two young daughters.

The layout of each house was designed to accommodate the different needs of their occupants. In Le Corbusier’s words “one accommodates a family with children, and is thus composed of a quantity of small rooms and all amenities needed by a family, whereas the second is designed for a bachelor, owner of a collection of modern paintings, and passionate about art.” The small “purist” bedroom, known as such because Raoul La Roche hung his favourite purist paintings by Le Corbusier and Ozenfant here. The roomwas sparsely furnished with only a bed, a metal table, a low armoire, and a rug. The La Roche House is the first building in which Le Corbusier’s “Five Points Towards A New Architecture”, to be articulated at a later date, were implemented.

1. Pilotis – The Art Gallery is supported by slender pilotis, freeing up space on the ground, thus allowing the creation of a garden. “By building on pilotis, we can recuperate in the garden, nearly the totality of the terrain occupied by the construction”. 4. The open facade – The framework of the house consists of concrete posts, beams and brick blocks, the walls do not bear weight. 5. Roof gardens – To avoid water being projected onto the external walls and freezing in winter, Le Corbusier constructed roof terraces in reinforced concrete, equipped with internal water drainage systems. Flowers, grass and shrubs were planted to maintain a consistent level of humidity an prevent the reinforced concrete from cracking. Le Corbusier first used the phrase “architectural promenade” to describe the La Roche House : “The second house will be something like an architectural promenade. We enter: the architectural spectacle presents itself to our gaze; we follow an itinerary, and various points of view unfold one after the other; we play with the flood of light illuminating the walls or casting shadows. The window bays open up views onto the exterior, and we rediscover the architectural whole.” (Oeuvre Complète, 1929).

The two staircases and ramp provide a multitude of points of view, inviting the visitor to explore… Ramps were Le Corbusier preferred means of joining two floors. “We climb a ramp little by little, a sensation entirely different from that given by climbing a staircase. Stairs separate one floor from another; a ramp ties them together” (Oeuvre Complète, 1929). The view into the dining room from the library The Art Gallery’s natural lighting was enhanced by a long lighting fixture. The kitchen, designed for use by the caretakers, was tiny but incredibly well-lit. Maison la Roche is also Le Corbusier’s first experiment in the use of colour in architecture. Here he uses colour to make volumes stand out or on the contrary, disappear, painting walls in shadow blue, those well illuminated red… Although the house is by no means all white, Le Corbusier placed a high importance on the house’s white interior. Colour is applied to make the white stand out. Le Corbusier’s use of colour rhythms the “architectural promenade”.