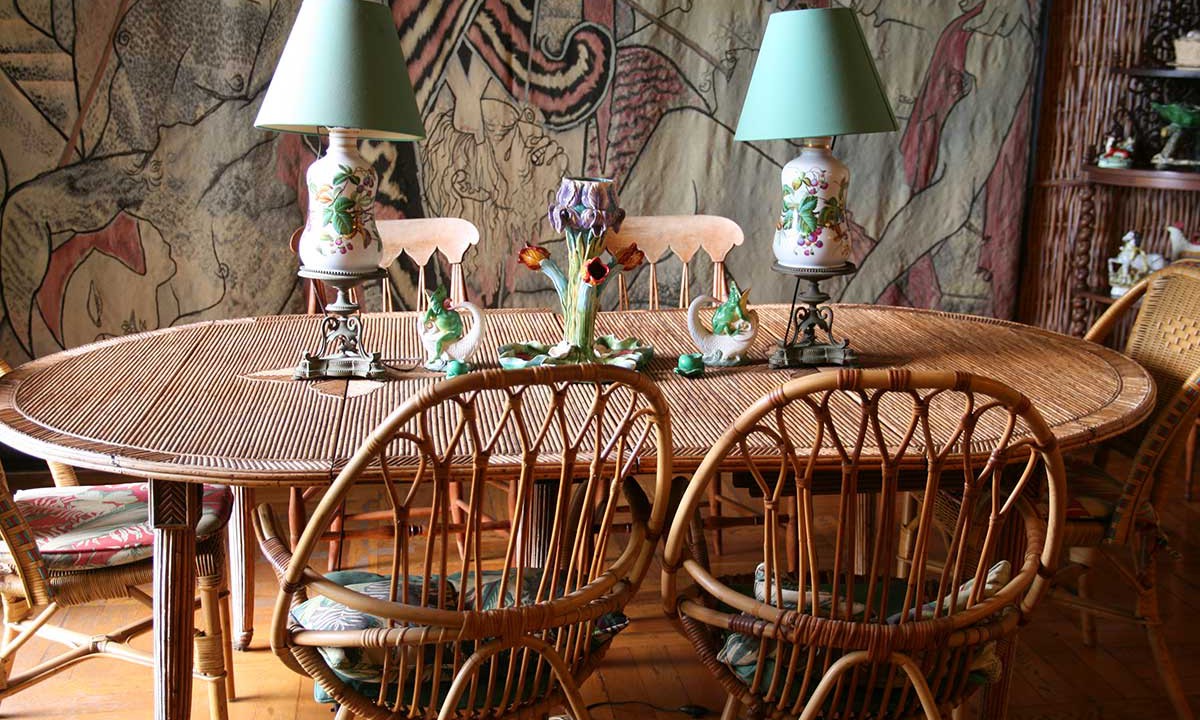 Villa Santo Sospir must be one of the most beautiful houses I have ever seen. It was bought by Alec Weisweiller in the 1940s, who had promised his wife Francine her dream house in the South of France if they survived the war. At the time it was one of the few villas overlooking the sea next to the lighthouse of St Jean Cap Ferrat. The name “Santo Sospir” comes from the traditional name of St Jean Cap Ferrat, Cap Saint Sospir, named after a sixth century monk who had lived in the area. In Spring 1950, Francine Weisweiller invited Jean Cocteau, who had just finished Les Enfants Terribles, for a week’s holiday in the villa, together with his companion and adopted son, Edouard Dermit. Cocteau felt restless after a couple of days and asked Francine’s permission to do a drawing of Apollo on the wall above the fireplace. This was followed by two “priests of the sun” on either side, closely resembling the fishermen of nearby Villefranche, wearing traditional hats and carrying their nets.

“Quand on décore un mur, on décore les autres” (Once one decorates one wall one decorates all the others) Henri Matisse. Jean Cocteau’s one week stay extended into twelve years and progressively each wall in the house was painted and frescoed or “tattooed” with figures inspired by Greek mythology. After the walls came the ceilings, which were covered with geometric drawings in delicate pastel shades. Cocteau did the entire house without sketches, drawing directly on the walls and on or around the furniture. He drew first in charcoal, then used coloured pigments mixed with raw milk to make a tempera.

The dining room features a tapestry designed by Jean Cocteau and given to Francine Weisweiller as a present, rattan walls and ceilings, and wicker furniture. The furniture and fabrics were chosen in collaboration with Francine Weisweiller’s friend, Madeleine Castaing, to complement Cocteau’s drawings. Over the tile mantelpiece in Francine Weisweiller’s bedroom a lush nymph prepares to punish Actaeon, who had surprised Diana, goddess of the hunt, at her toilette. A shepherd, a powerful mythological figure, was placed above the bed of Francine Weisweiller. Francine Weisweiller’s daughter Carole’s bedroom, which she still uses today when she visits the house. The terrace, where Carol remembers the cocktails prepared by Cocteau and shared with guests such as Pablo Picasso and his future wife Jacqueline,  the composer Francis Poulenc, Coco Chanel, Greta Garbo… To visit the Villa Santo Sospir, contact Eric to make an appointment.