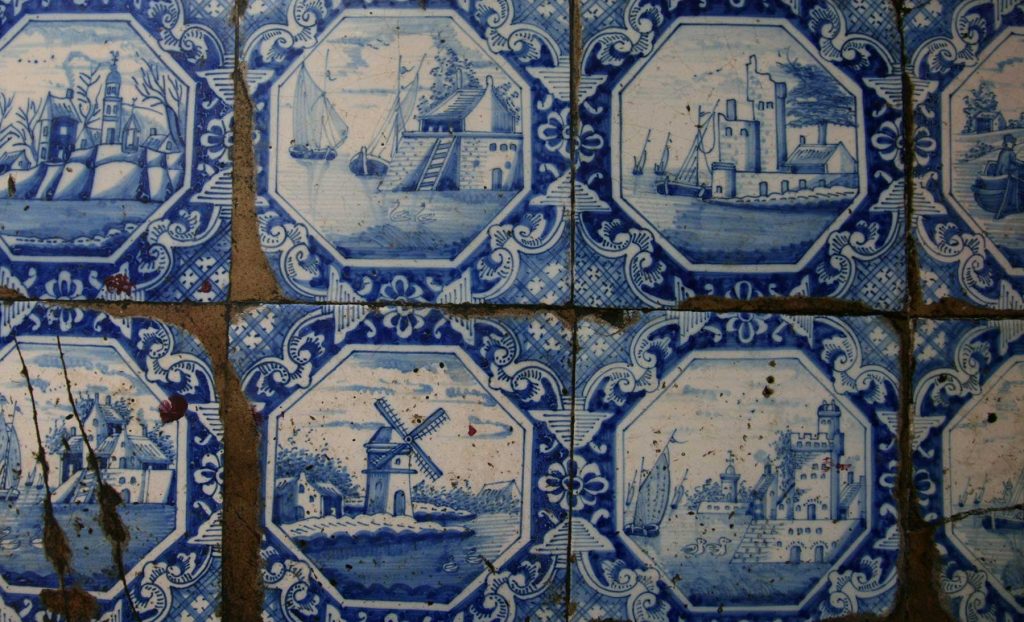 The Musée Jean-Jacques Henner is located in what was the nineteenth century home of the artist Guillaume Dubufe. Guillaume Dufube, born into a family of artists, was very active in the field of interior decoration. He completed works such as the ceilings in the restaurant of the Gare de Lyon, the Sorbonne library, the foyer of the Comédie Française and the Hall of Festivities at the Elysée Palace.

Dufube bought his house in avenue de Villiers in 1878. The Monceau area had only recently been developed by Baron Haussman and was rapidly becoming very fashionable, featuring a mix of artists studios and big mansion houses.

Dufube decorated his house in an eclectic way characteristic of the nineteenth century, mixing styles such as French Renaissance, Ottoman Empire, Andalucia, China, North Africa. The dining room still features the Chinoiserie fireplace decorated with traditional blue and white Delft tiles. Unfortunately for us, other elements, including the wood and mother of pearl wall panels, the blue Chinese dishes, the consoles holding bronze storks and the yellow silk curtains have disappeared… The development of commerce and foreign travel, the publication of works which diffused different styles such as “The Grammar of Ornement” by Owen Jones (1856) and “Les Arts Arabes” by Jules Bourgoin (1873), and the 1878 Univeral Exhibition and its Oriental Gallery, encouraged the emergence of an eclectic, increasingly exotic look, described in many of Zola’s or Maupassant’s novels. Dufube transformed his garden into a Jardin d’hiver in 1889. More similiar to a living room than a garden, it was full of statues, paintings and objects – Japanese furniture, red velvet couches, bronze pendant lights… A small room at the end was used as a theatre every Tuesday evening.

On the first floor, the salon rouge was described by Grande Dame, a magazine dedicated to elegance and the arts, in 1894: “It feels like you have entered an Arab mosque. In terms of line and colour, it is pure Orient. Three white arcades – like one finds in a Moorish house – and arches from which hanging little lamps made of enamelled glass – separates the rest of the room from a sort of retreat in which there is a very low bed, covered with a fabric one finds only in places such as Cairo, Constantinople or Damascus.” The painted frieze in the gallery. The house in avenue de Villiers was purchased from Dufube’s heirs in 1921 by Marie Henner, in order to create a museum dedicated to the works of her uncle, Jean-Jacques Henner, a contemporary of Guillaume Dufube.  The collections tell the story of Henner’s life as a highly successful artist, from the early days in his native Alsace to his stay at the Villa Medici after his Prix de Rome and finally to Paris.

Recent renovations have been dedicated to re-creating the house’s nineteenth century atmosphere, which had been partly lost in earlier restoration work. The walls have been painted in their original colours and Jean-Jacques Henner’s paintings are now hung in dense groups, which is both extremely contemporary and at the same time reminiscent of the nineteenth century. The painting which made Jean-Jacques Henner’s name, “L’Alsace. Elle Attend” (1871). This painting marked the loss of Alsace and part of Lorraine to the new German Empire following the 1870 Franco-Prussian war.

The top floor of the house, made into a studio in 1894, shows a selection of sketches and paintings, together with furniture, sculptures and objects that belonged to Henner.